This working paper is part of a collective research carried out by Maguelone Vignes and Marco Ranzato in the framework of Metrolab.brussels project. The first part of this analysis is available here.

The Brussels ERDF project for an integrated medical centre (CSSI) in Cureghem run by a consortium led by Médecins du Monde was one of the four case studies of the Metrolab MasterClass In/out: Designing Urban Inclusion held in Brussels in January-February 2017. This investigation brought to light the fact that the forthcoming social and health services integration into a one-stop centre represents just a small intervention within a project of urban transformation that has a much greater extension. First of all, the integrated centre is part of a large real-estate operation named CityGate and driven by CityDev, an institution of the Brussels-Capital Region in charge of the regional urban development. In particular, CityDev’s mission is to provide space for production, accessible housing (as a part of the urban renovation asset of the region) while making them cohabiting (CityDev, 2017). Accordingly, the development programme of CityDev foresees the implementation of a Zone for Enterprises in the Urban Context—Zone d’Entreprises en Milieu Urbain (ZEMU), and the construction of a number of housing projects mainly allocated to middle-class households. During the MasterClass it soon became apparent that Cureghem is a transforming neighbourhood and that this process will accelerate in the coming future. In addition, the investigation highlighted the wide range of non-profit organisations operating in a neighbourhood that is one of the poorest of Brussels. This pixelated presence of the civil society in Cureghem appeared a strategic value that could work as an anchor in the process of changes. Metrolab has organised the Ateliers Cureghem en perspectives in order to meet the existing associations working on the area, to collect their precious understanding and knowledge of the site, and to share their diverse perspectives on the planned urban changes. The ultimate objective is to favour a process that could strengthen the network of representatives of the local civil society while identifying common challenges, opportunities, and possible synergies or collaborations to set up in order to face the coming transformations.

The Ateliers Cureghem en perspectives are conceived as a process in three main stages. The first stage consists of cartographic workshops replicated till the end of 2017 and for as many times as the number of local associations ‘interviewed’ is considered satisfactory. In a second stage, the results of the cartographic workshops will be presented to the representatives of the local institutions in the form of a focus group where also the associations involved will be actively present. The final third stage (optional) will be the exhibition of the materials worked out, as a public event jointly organised by Metrolab and Médecins du Monde.

This working paper is related to the first stage of the Ateliers Cureghem en perspectives. Two cartographic workshops have been finalised one on the 8th of June 2017 and the other on the 6th of July 2017.

The cartographic workshop is designed for 6-12 participants and lasts about 3 hours. Each workshop is organised in four main intermediate stages. Participants work in two parallel groups using the same methodology. At a later stage, the two groups merge.

The basic working tool is a big map (1.3x1.3 meters) of Cureghem framing an area of 2x2 kilometres (Figure 1). The map shows the built up space, the main roads, the lines of the train and the metro stops. Only the toponomy of few main streets and squares is reported. 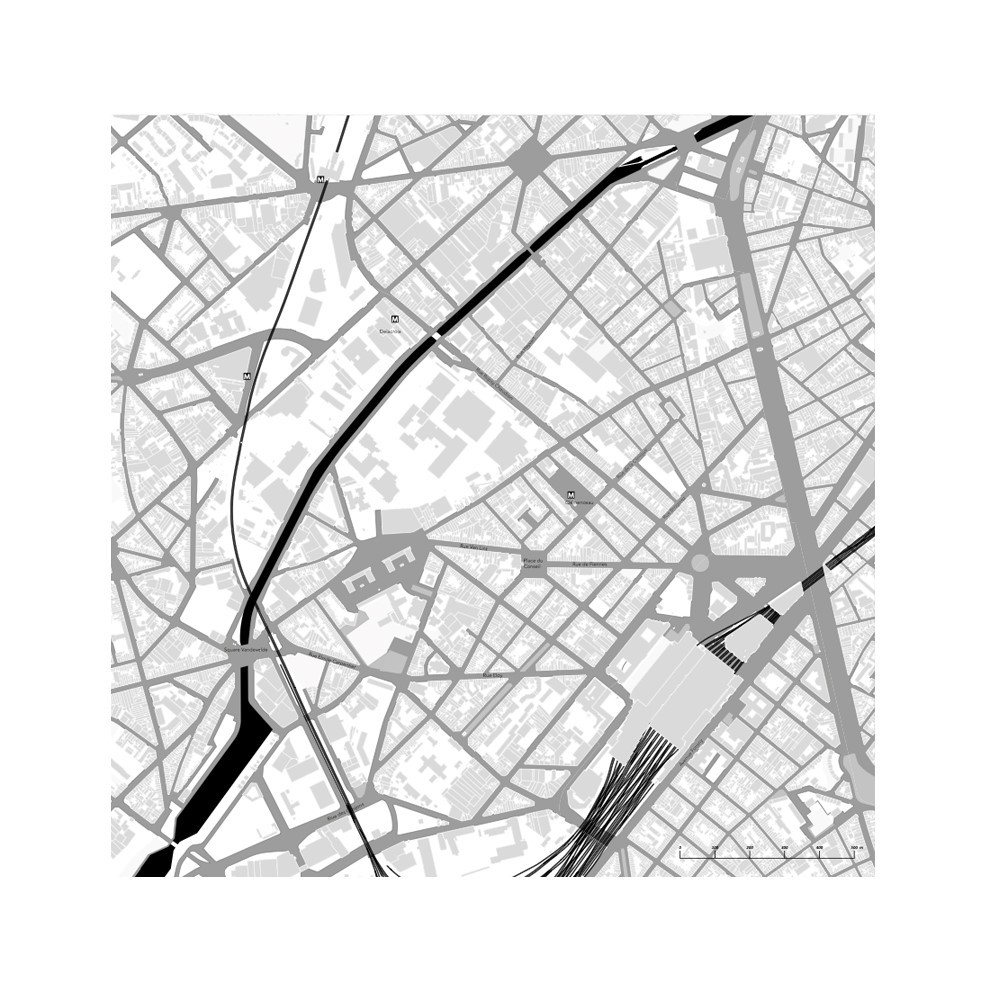 Fig. 1 The basic map of Cureghem used for the cartographic workshops.

Stage 1 – Detecting the reference places Participants are asked to point on the map their own reference places: common places, places to avoid, equipment, landmarks. The objective is to allow participants to get acquainted with the map, its scale, and the graphic code but also to share their own perception of the area.

Stage 2 – Placing themselves and the other cooperating associations Using the map, each participant is asked to describe how the activities of its association unfold in the area. In addition, each association has to point in the map three other associations whom it works closely with. The objective is to enable the associations to know each other, to identify the existing cooperations and their extent over the area.

Stage 3 – Identifying the future (physical) urban transformations Participants are asked to trace on the map both on-going and incoming projects of urban transformations in the area. The objective is to enable the associations to visualise the forthcoming spatial changes and to gain awareness about them — including knowledge of the stakeholders they involve and programmes associated to the mentioned urban projects.

Stage 4 – Positioning themselves and collecting ideas/proposals regarding the changes. Participants are asked to imagine themselves — and their association — in Cureghem as if all the urban transformations were realised. They are hence asked to express their perception of the change. Afterwards, participants are invited to express their ideas about the initiatives that could be taken in order to handle the transition. The objective is to record and share the reactions of the participants with respect to the urban transformations in the area.

Final stage – Sharing In this final step, the two groups of participants join. One group presents the work to the other group alternatively. A discussion follows. The objective is first to share the workshop experience including the knowledge about the urban transformations and, secondly, to leave room to the spontaneous formulation of possible responsive strategies to implement. 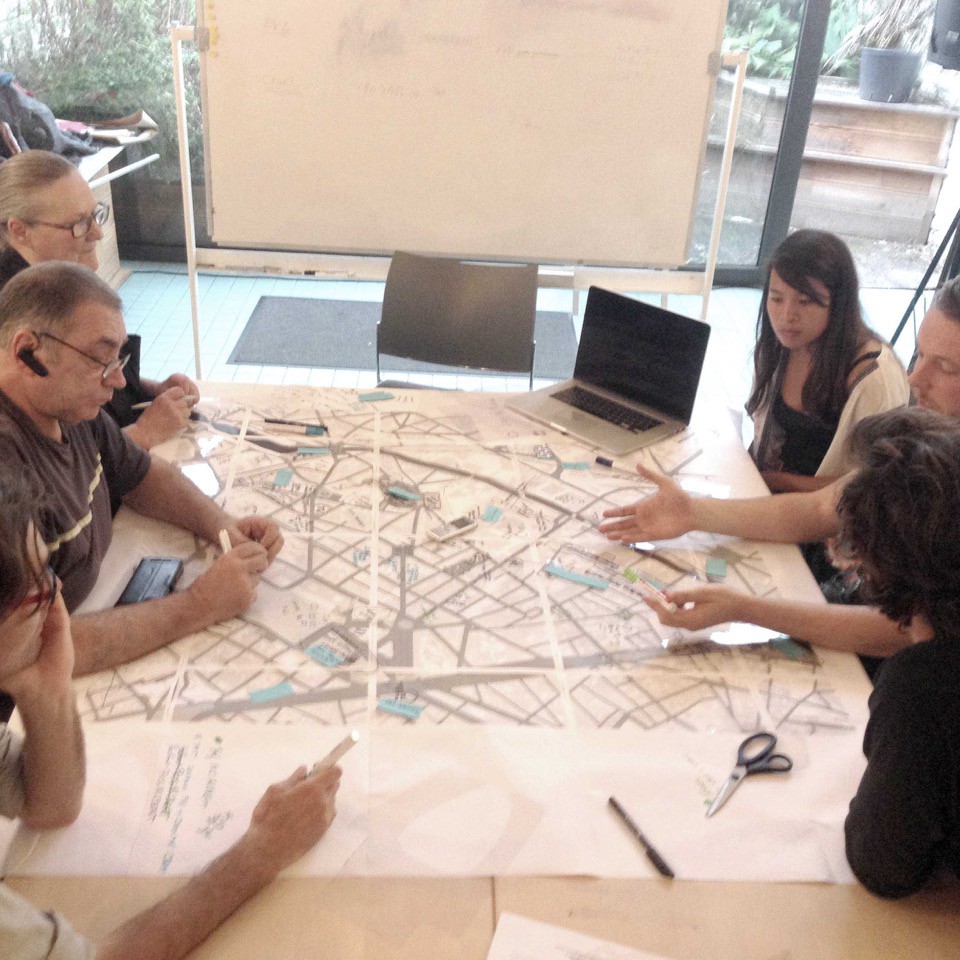 Results of the cartographic workshops

The methodology employed proves to be effective considering the usefulness of the map in making the upcoming changes visible and in fostering the expression of the perception of these changes. The interaction among the participants worked well also thanks to the interest showed towards the activities proposed 1. 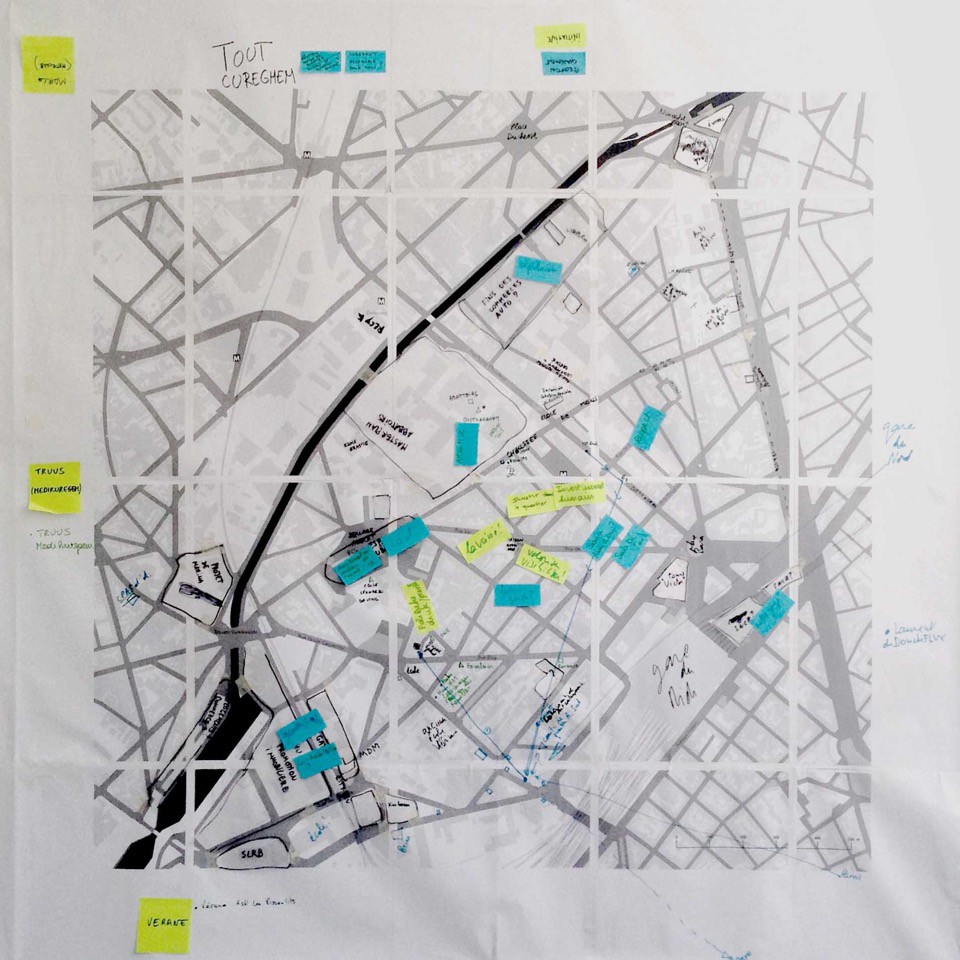 Stage 1 – Detecting the reference places (hot spots and common spaces) This first exercise helped the participants to get familiar with the cartographic support. What comes out of this first stage is that Cureghem is a neighbourhood in transition and a receptacle of newcomers. Hot spots - In areas such as Lemmes and Goujons, the local population has a strong sense of belonging. Some other area is perceived as hot spots, especially during the night-time. Moreover, concentrated in certain spots (for example, Parc de la Rosée or around Place Lemmens), there exists tension among diverse social groups (for instance, between newcomers and grounders, or between population with different origins). Common spaces – Abattoirs d’Anderlecht, Place Jorez (Clémenceau), Place de la Résistance, Chaussée de Mons, and the parks are very popular places for many different social groups. However, some of these spots being places of encounter among diverse groups are also points of social tension. In general, the need for green spaces is shared among the participants. Tendencies – Some participants warn that there is a tendency to build private open spaces (for example, the Ecole des Vétérinaires and new housing projects).

Stage 2 – Placing themselves and the other cooperating associations It emerges that all the participants collaborate with other local associations on a regular basis. They are all willing to enlarge their network in order to build new projects and hence to further meet the requirements of the local population. Some institutional networks appear fundamental because they operate as platforms between sectors and/or integrate a huge amount of members, partners or users (for instance, Curohall, Maison de la Cohésion Sociale, CPAS). Similarly, the planning tool of the neighbourhood contracts (Contrats de Quartier) provides substantial opportunities to build working relations. Places and centres like the hall Excelsior, the Centre Euclide, rue de Fiennes, Curohall, and 16arts are frequently visited by different associations. The project Plateforme Cureghem Propre or the project of the collective garden Pot’Albert also provide occasions of encounter.

Stage 3 – Identifying the future (physical) urban transformations Participants are aware of projects like the de-placement of the car garages along the rue Heyvaert or the project of the Victor project, an ensemble of three towers close to the Gare du Midi station, combining housing, offices, and retails. They also sometimes know small and medium-sized projects located in the immediate surroundings of their everyday radius of action. We instead noted a general lack of comprehensive knowledge about the urban transformation associated to big real estate operations and more official and/or institutional planning. Some participant shows also mistrust for some of these operations because they are accompanied by a high rate of uncertainty or because they are sometimes perceived as the promotion of some political group. It is noticeable that the masterplan of the Abattoirs d’Anderlecht is generally well known by the associations thanks to the communication operated by the corporation responsible for the infrastructure (for example, open explorative walks of the site). Other cases such as Biestebroek and the Marina, both real estate operations along the Brussels-Charleroi canal, are known by a number of participants and perceived as shoking because of their extension and/or programme.

Stage 4 – Positioning themselves in the future (perception) and collecting ideas about the initiatives to take (proposal) The great part of participants was astonished to see the magnitude of the forthcoming urban transformations. What worked particularly well was the visualisation of the projects all together. Perception – Some participant perceives as paradoxical the effort of the institutions for supporting social cohesion plans when compared with these big financial operations. Concurrently, some other participant believes that these urban transformations could have a positive impact on the physical environment but worries about the future social cohesion of the area. In general, there is a shared feeling that these changes, while bringing middle class citizens, will foster gentrification and make disparities more evident. Preoccupation is expressed also regarding the capacity of the public services (kindergartens, schools, and police service in particular) to respond to the increase of population. Proposals – Participants share the need for informing the local population about the forthcoming urban transformations. This would allow preparing them and, in turn, would make it possible for the institutions to listen to their reactions and to take into account their possible concerns. The participants also think that the new projects have the responsibility to bring new services accessible also to the current local population. Another important shared asset is the implementation of initiatives that aim to link disadvantaged and more affluent social groups. Finally, participants argue in unison that any measure/strategy that allows local population to stay should be put in place.